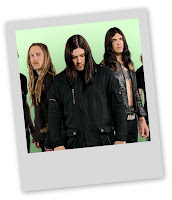 I caught the band Shinedown at the San Diego House of Blues last month. The room was wall to wall with rockers and there I stood in my biz casual holding a noteboook (I just came from a working supper.) Needless to say, I felt a bit out of place, but I enjoy catching live music when I'm on the road, so there I was.

[FYI - If you don't own any Shinedown, start with Simple Man and I Dare You.]

I knew I would be hit with a wall of sound, but I didn't expect to be overly impressed with the audience rapport skills of Shinedown's lead singer, Brent Smith. However, after the first 10 minutes of the show, he had everyone in the room not only loving their music (which they already did), but also respecting him as an entertainer, crowd-leader and man.

Here's what went down:

1. After the opening song, he gave a heart felt thank you to everyone for coming and paying hard earned money to be there. He graciously put the thanks on them. He even said their city was beautiful, which granted we were in San Diego, but even when you compliment something obvious to a crowd of people, they respond positively. LESSON: Put the focus and thanks on the audience quickly, especially if you are playing a role where most people in that role are in it for selfish reasons (ie - a self-absorbed rocker.)

2. After the thanks, Brent did something I have never seen at any concert, he had everyone give a high-five or hand shake to someone next to you. We do this all the time at our speaking events to break down barriers between audience members, but in this venue Brent did it for a different very obvious reason. LESSON: Get the audience interacting with you and each other quickly.

3. Twenty seconds into the third song, he stopped the song because a fight broke out in front of the stage (this was a hard rock concert you know). He physically and vocally intervened and let everyone know that tonight is about the music and having a good time, not being stupid and fighting. He waited until the two either made up or left. The entire crowd went crazy clapping when this went down. Everyone knew what type of night it would be from then on - all about the music of hard rock and none of the rest. LESSON: Control the room or the room will control you. Its not that a fight will break out at your event/conference/meeting if you don't, but losing control also looks like disengagement, side chatting, texting, no learning, no emotional buy-in or a host of other behaviors.

4. He got the crowd involved in the singing. Most of the time they were singing anyway, but he took one song and orchestrated their involvement. The cool thing is that it was at the start of one of their new songs that not everyone was familiar with. They were after he finished. LESSON: Involving the audience in a big, meaningful way increases all the things you want increased during and after your program - entertainment, learning, retention of content, retention of the experience's feelings, etc.

5. He introduced a hard rock love ballad by having saying that every man here is about pride and hard work and integrity, but we would be nothing without our women. He made great points quickly and honestly and even the single dudes in the room could respect the foundation of his logic. LESSON: Speak from the heart and there are very few presentations where the heart isn't appropriate to bring into the discussion. It connects with everyone.

6. Brent Smith was a performer to the extreme, both as a lead singer of a hard rock band and as a leader of the room of people having a great time. LESSON: Your audience needs you to be a master of both your content and the delivery moment of your content if you are going to make the impact you need to make.
Posted by Unknown at 8:00 AM 1 comment:

Email me directly with any question you have about your next presentation, training or speech and I'll reply back with my best answer. Thanks!
Email me your question